The best description I can give of The Greasy Strangler is that it’s Napoleon Dynamite meets John Waters with a slasher twist. The film is directed by Jim Hosking and produced by Elijah Wood, who is carving a very respectable name for himself in the horror community with his production efforts. This movie has been getting mixed reviews, ranging from dull, unfunny and disgusting, to a brilliantly gross accomplishment. I fall into the latter category, as I loved this film from beginning till about two minutes before the end.

The Greasy Strangler follows the father/son team of Big Ronnie (Michael St. Michaels) and Brayden (Sky Elobar). The duo run a walking disco tour which doles out questionable unverifiable information and is violently opposed to any freebies whatsoever. Big Ronnie has raised Brayden since infancy and after the voluptuous Janet (Elizabeth DeRazzo) takes a fancy to Brayden after meeting him on a tour, the already volatile father/son co-dependent dynamic becomes threatened and a war for Janet’s heart begins. And oh yeah, there is a killer running around coated in food grease and strangling people.

This is not a film for everybody. If you are not a fan of the gross and outrageous, and you need more sense with your horror, don’t bother. But if you are willing to suspend your disbelief and enter a world filled with oversized monster penises, unkempt vaginal hair, insane wardrobes, truly disgusting food preparation, flatulence, deliberate cheesy effects, unwanted nudity and a touching little love story, then you will love this unique film. The main actors all totally commit to their insane roles gleefully with no shame, abandoning their clothes and offering us some very unwanted full frontal. Michael St. Michaels and Sky Elobar are great as the father/son team and Elobar in particular brings a sweetness to his role. The relationship between him and Janet is actually sweet, and I was fully rooting for these two genuinely crazy kids. The humor isn’t laugh out loud funny, with the exception of the early moments where I was crying and laughing while watching the Pakistani gentleman and his two tourist buddies. I would love to see a film which just follows these dudes around. Overall, being a huge John Waters fan my whole life, I totally embraced this crazy world and everything in it. 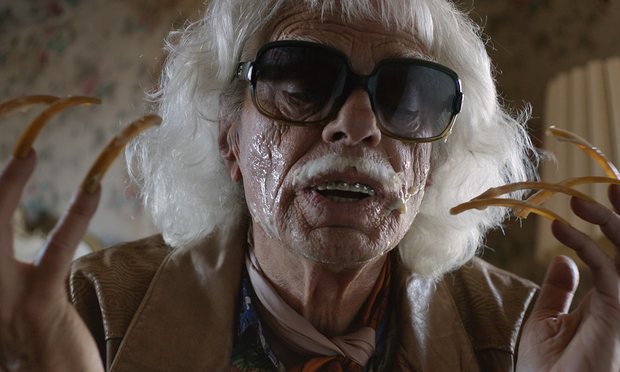 My only complaints are minor, but prevent me from awarding this the full five zombie heads. I would have liked some backstory regarding the strangler’s affinity for grease. Apparently the originally cut ran around 45 minutes longer, so maybe we will see a director’s cut down the line where we get an origin story. A shift in the love story dynamic midway through felt a little disingenuous and made me dislike a character that I thought was sweet and was rooting for. Also, the last couple of minutes the film went deeper into surreal territory than is good for me. That last shift in tone left me walking away scratching my head not really getting what had just occurred. In the end, this is a film has high re-watchability value and will surely be high on my year end top ten list.