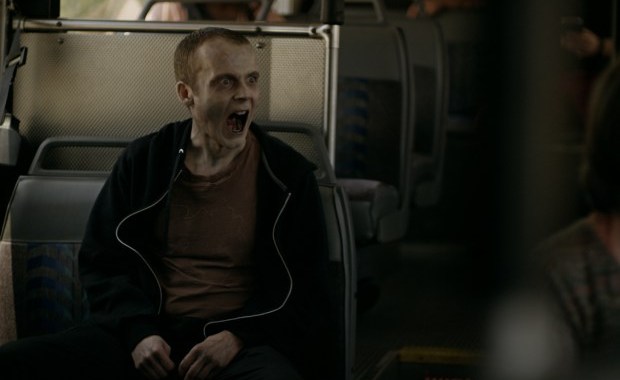 We Go On is the latest film from Jesse Holland and Andy Mitton, the writing/directing duo behind YellowBrickRoad, the 2010 New York City Horror Film Festival winner for Best Feature. The story follows Miles Grissom (Clark Freeman) as a paranoid phobic fearful of death, especially by automobile. After acquiring an ad offering $30,000 for proof of an afterlife, hundreds of people contact Miles about the announcement. His mother, Charlotte (Annette O’Toole), visits him offering her help, although she is a skeptic. After weeding through the submissions, he narrows it down to three people— a doctor using a scientific explanation, a psychic medium who works in her family’s restaurant and a philanthropic entrepreneur in search of the same answer he pursues. On his quest for a ghastly encounter, Miles stumbles upon an airport runway employee, Nelson (Jay Dunn), who changes his life forever.

To make a successful feature film, the best actors aren’t necessary (although it’s a major plus), but a script, and all aspects of it— from the actual story and plotline to subtext and symbolism— needs to be unyielding. Without a tale of interest, it will take a whole lot just to pull a flick out of the mud. Luckily for We Go On, Holland and Mitton create an extremely interesting concept, enhanced by solid acting, especially from Clark Freeman and Annette O’Toole, and fantastic writing.

The relationship is realistic and comes off so from their charismatic fluidity. In film, as in life, there is an obvious Freudian relationship between a mother/son and father/daughter. The dynamic is usually archetypal, where either person may take the role of “off their rocker” and the other as “caretaker.” Although these roles are not the only dynamics in parent/children relationships, in this film’s case they are. Miles and Charlotte suffered the loss of their patriarch back when he was just 3 years old, and he has been apprehensive since. Now as an adult, Miles has severe traumatic phobias stemming all the way back from when his father passed, although now his psyche is in an extremely agitated state. His characters ability to function comes through mindlessly editing late night infomercials. Freeman possesses the spirit of this tenuous, broken man and seduces viewers through his characters ups and downs while dealing with tribulations. This is alluring and provides that connection to reality many viewers seek in film, and can be hard to come by under the horror genre’s wide umbrella.

On the other half of the mother/son relationship is Charlotte, played by the incredible Annette O’Toole. She nails the role of a bad-ass, purse gun toting mother who exclaims, “no one fucks with my son.” She embodies the polar opposite of Miles. She is loud, spunky and does not hold her tongue, and what’s not to like about that in a woman. Charlotte is an extremely interesting character and is the leader of a “mother” motif running through the film, whether the filmmakers realize or not— that’s the beauty of art and interpretation.

Charlotte, along with Alice (Laura Heisler), Nelson’s significant other, and Josefina (Giovanna Zacarías), the psychic who is one of many people claiming they can answer Miles’ ad to prove an afterlife exists. The females in this movie are strong alphas in their environment, and they have the aspects of a mother. For example, there is an old man, presumably her father, a young man (most likely her brother) and a boy (her son), in Josefina’s home. She is the only female, and along with working in the family restaurant, is basically the homemaker. Alicia took matters into her own hands when it came to her relationship with Nelson, and Charlotte, supports Miles 100% on his venture, even though she is a skeptic and doesn’t believe in the spirit world. These characters and actresses embody the strength and authority women have in life.

The writing in We Go On is beautiful, poetic at times and does a significant job deflecting away from the small twists and turns the film takes, which is usually not what happens. In one scene while discussing death with Miles, Charlotte says, “…we go out like lights.” Later in the scene when talking about seeking the answers to the afterlife, she exclaims, “…it’s ugly to beg for more.” These two lines are just a blip on a wonderfully written script and give insight into not only the character, but provides existential commentary. This film is the pitch-perfect example of how a powerful script is necessary for a remarkable film.

Without revealing anymore, it should be noted that the expectations for the movie are successfully met. After YellowBrickRoad, and now We Go On, Jesse Holland and Andy Mitton show their visions have taken a superior leap in the right direction to making more full-length features in the immediate future.