I was first introduced to The Walking Dead through the comic book series. After reading them, I thought they were revolutionary. The combination of horror and drama made me, as a horror fan, focus on the way a zombie apocalypse affects the human experience, rather than pure zombie mayhem. I remember calling my Dad and telling him to read this new comic and how it would make a great HBO series— I never believed it would happen though. Eventually, my hopes came true. A few years later, to my amazement, the show was picked up by AMC. Anticipation for a live adaption of The Walking Dead never wavered, as the comic book series kept getting better and better. It has presently plateaued a bit, but is still a superior horror comic compared to other series out there.

The first episode of The Walking Dead debuted on October 31, 2010, garnering critical acclaim and amazing ratings. This is an incredible feat for a horror television program based on a comic book. Comic books and horror succeeding on the same show never ever, never ever, never ever happens! This show did and it was good. It was probably the only adaption I have come across that I did not mind the deviations from the original origin. I enjoyed the fact that two successful universes were created from the same product with some similarities. More importantly, the alterations made were interesting enough to not incite pandemonium from not following the storyline exactly. Since the debut, the show has broken numerous ratings records, spawned a spinoff (Fear the Walking Dead), has a talk show (The Talking Dead) and helped conceive numerous novels expanding storylines from the show, thus creating new mythologies.

So why am I writing this article hating on this show? Well my complaints are numerous, although specifically target content and the effect on the genre.

When the show came on and the masses were watching it, I was so excited. People were finally going to see how great the maligned horror genre was. Finally, I was no longer going to be a weird outcast nerd! In all honesty, I probably earned that moniker all on my own and will never be able to shake it— and that’s a-okay. I imagined having great debates regarding slow zombies versus fast zombies, what would happen if zombies really rose from the grave because hell was too full, and if a zombie can beat a shark? We all know the zombie apocalypse is inevitable and not just some fantasy. C’mon people, wake the fuck up! It’s gonna happen!  Anyway, I couldn’t wait till all The Walking Dead lovers further pursued their love of all that is zombies, by going back and watching the Italian living dead library, the Blind Dead series and the George Romero Holy Trinity. I felt like Burgess Meredith at the end of the greatest Twilight Zone episode ever, “Time Enough At Last,” where the joy these conversations would bring was equated to his apocalyptic discovery, if not better. I couldn’t wait. In the end, what I got was The Twilight Zone twist. My glasses shattered on the floor, hope smashing it to bits.  I never got a discussion where I told someone that 28 Days Later is ABSOLUTELY not a zombie movie. I got no respect, nothing. Radio silence.

The masses obsessed over The Walking Dead television show, their obsession isolated to that rendition and that alone. From talking with other horror fanatics, they’ve experienced what I have. No matter how much I recommended the comics or novels as superior products, people just didn’t care. They only wanted to watch the show; some repeatedly over and over. For example, I work with a guy, who on Monday will watch the previous episode at least two or three times. Do you think he’d ever pick up the dirt cheap The Walking Dead Omnibus on Amazon to further his jones? Never! It drives me crazy! How and why did this happen? Most pop culture fads spawn numerous rip offs, but not this one. When I ask or tell people about other zombie products, I usually here “I don’t like horror movies.” “WHAT THE FUCK DO YOU MEAN!? YOU ARE CONSTANTLY TALKING ABOUT A HORROR SHOW!”

The Walking Dead television show is pretty good, overall. I was more or less consistently entertained, even though some seasons had an unnecessary lingering pace and flying by the seat of their pants scripting. But like most horror fans I am forgiving, and I am happy to have the show out there for a mass audience. But over the years, I’ve listened to podcasts and other people within the horror community who also seem resentful of this show. I’ve discovered a crucial issue. It’s not really a horror show and it never was.

The Walking Dead is a drama with a horrific backdrop. Now if you are reading this and saying “no shit Sherlock,” you are rightfully, but there was a modification in the show that started to become a problem. The languid pacing, the constantly lingering in one area and never really absolving issues in a timely fashion became padding. Andrew Lincoln’s acting style started getting on many folks nerves. He seems to       preach while standing sideways and waving a gun around in an extremely unsafe manner. Many in the horror community thought this revolutionary show was going to get us mainstream acceptance. Rather, it gave us a shit sandwich so many began to resent it— including me. I stopped watching the show midway through Season 4 and haven’t missed it one bit. Maybe I’ll go back and finish the series and enjoy my time with it, but at this point I don’t give a shit anymore. The mainstream still watches obsessively, while the horror community simply shrugs their shoulders. Comic book nerds got their time to shine with the success of their cosmos, so why are the horror nerds still condemned to live their lives in the shadows, especially when we have the most successful show on TV? 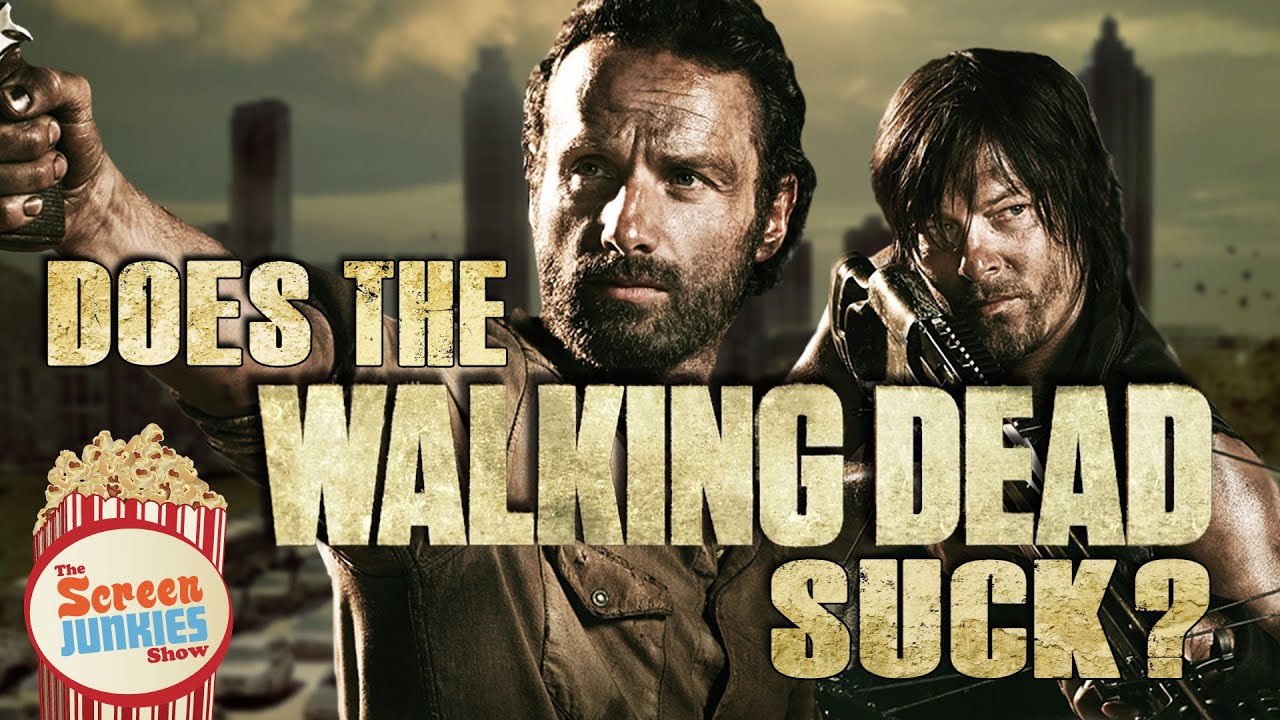 Then AMC and Robert Kirkman decide to do a spinoff, Fear the Walking Dead. I avoided it for awhile, but was definitely intrigued with a show about the beginnings of the zombie apocalypse. I watched the first 90 minute episode and wow. What a hunk of shit! Word is it gets better, but based on that first episode there’s nowhere to go but up. At least in The Walking Dead the dramatic elements are fairly interesting, where in this boring drivel we get a generic drug addict storyline where the kid is an unsympathetic dickbag. And on top of that, there’s basically zero zombie stuff until the end of the episode. Why the fuck did you expand this episode? So I can listen to 90 minutes of Kim Dickens argue why her obnoxious junkie son doesn’t suck ass? WTF? What a waste!

I just recently watched a new film from Denmark called What We Become, which is about the beginnings of a zombie apocalypse. I didn’t love the movie and actually thought it would have made a better TV episode, rather than a full blown feature. What it did do perfectly was create a balance between drama and horror. Horror fans have no problem with drama being in their horror, but what most despise is the dreaded soap opera. Fear of The Walking Dead should have taken a cue from this movie.